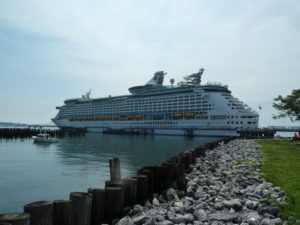 This would be my 3rd time on a Royal Caribbean ship.  I wish I would have written down my thoughts on the other ships I had been on.  I guess, it’s never too late to start.

For some strange reason, I felt from experience of past cruises that I should have boarded the ship earlier.  I remember, in the past, boarding the ship and going straight to the Windjammer cafe and walking around with a plate of food, looking for a place to sit and eat.  I think, for this trip, I wanted to get a place to eat on the ship before the big rush.  Well, the night before we stayed at an Embassy Suites and so we had a big breakfast before boarding.  Windjammer on the first day did not happen for us.

Boarding time is a range.  On this ship, it started at 10am and went on ’til 2pm.  I think all aboard time was 2:15pm for a set sail at 3pm.  We did an online check-in but we wanted to get to the port earlier than our designated time.  I figured that if we got on the ship early, there may be more things to do.  Wrong!  For starters, getting to the port took time.  We were in a line to just get off the Uber, for 30 mins.  Now I remember the other reason we wanted to get to the ship early.  In the past, I remember waiting in a long line at the terminal, to check in.  Well, that didn’t happen.  Once we got to the port, the rest was a breeze, we were checked in and ready to get on the ship, in less than 15 mins.

On the ship, we weren’t allowed to go to our rooms ’til after 1pm.  I had a rolling carry-on that was quite frankly, annoying to wheel about.  We just sat in one of the many corners.  I wanted to explore the ship and every floor, but not without leaving my luggage in the room.  Also, I was hoping for some activity, but I guess nothing starts ’til the ship leaves.  In retrospect, it wouldn’t be fair to the guests who arrived later.  So, getting on the ship early (we got in around 11:30am) means just finding a corner to sit and wait.  So much for the benefits of getting on the ship early.  Yes, I took some pictures, but mostly, I wanted to get situated and that didn’t happen ’til after the ship left port.

By the time we got to our rooms, got situated, got done with the mandatory muster drills and tried to walk about the ship, I figured it was time for dinner.  We had anytime dining and when we went down to our designated floor, the line to just get to the concierge took 30 mins and then another 30 to 45 mins of waiting to just get seated to eat.  There were 2 concierge lines.  One for those with reservations and one for those without.  Well, I didn’t realize we needed reservations for our package.  Apparently you can make online reservations.  I did not know that and trust me on this, we paid the price for that.  My suggestion:  MAKE A DINNER RESERVATION BEFORE BOARDING, even if you have O-my-time dining.  My snarky comment:  Make a dinner reservation before you book the cruise!  Please note that we did NOT do any of the specialty dining for an extra charge.  I’m opposed to the principle of it.  It’s just me.  If you do specialty dining, you may not face the the dinner timing issues we faced, but I do not know that for sure.

Here’s how dinner played out for us.  On the first night, I think we got in by 7:00pm (after waiting in line from 5:30pm).  I know we made the 8:15pm show (I have no idea how) at the Imperial lounge.  “If you Know it, Sing it!”  It was crowded and we didn’t have the best spots, but we were lucky to get seats.  We didn’t want to get into the wait for a table mode again so we decided to make a reservation for the next night.  We could only get a reservation for 7:30pm.  One night we were lucky to get in at 5:15pm.  Dinner in the main room takes time.  Plan to be there for about 2 hours.  You can rush through dessert and tea/coffee at the end and get out in 1.5 hours, but bottom line, dinner takes time.  The reason I’m being specific on the times is because of the shows and the evening trivia.  It’s been over 2 weeks since I was on the ship, so my memory is fading, but I remember a few of the nights, we couldn’t get in on time, even with a reservation and we ended up going to the Windjammer buffet for dinner.  So, my recommendation: Get the earliest dinner plan/reservations possible.  That way, you’ll have enough time to enjoy the shows in the evening without rushing and stressing about finding spots to sit for the shows.

Dinner itself was good.  In the main dining room they had a great soup and steak every night, so I was happy.  Of course they had dessert every night but I wasn’t blown away.  Maybe I was too full by then.  One night for the main course, they had lobster.  So, it’s worth it to get a reservation.  If you cannot get a reservation, no need to sweat it.  The buffet was quite extensive.  The good thing about the buffet is that it’s all quick.  You go eat and boom, you are done.

The shows:  Well, I have to say that the ice show was spectacular.  Do not miss it.  The shows we went to were Majority Rules, Action Comedy by Rick Novell, The perfect couple, 60 seconds or less, The Elton John Tribute, Battle of the Sexes, and Finish that Lyric.  The trivia we did were Disney, Michael Jackson and Star Wars.  One night we were very tired and called it an early night. My nieces went to the Quest and had a ball.  I think their team won, so it made it more fun for them.  I have been to the Quest before on other cruises (Royal Caribbean and Norwegian) so we didn’t feel the need to go, but if you have never experienced the Quest, it’s a lot of fun.  Every night there were options for karaoke and so we did.

On the cruise, I found myself comparing it to other cruises I have been to.  For starters, I remember how crowded the cruise to the Bahamas had been, but then on the second and third day, it felt like the crowds dissipated.  I don’t know where, but dining and other places did not feel as crowded.  That was not the case with this ship.  It was packed to the max.  I know they were sold out and I kept wishing that somehow the crowds would find other things to do, but that wasn’t the case.  Everywhere at all times, I felt the crowds only increasing.  I remember making a comment to my niece about that and she said something about, “where would they go, aunty?  There’s no where to go.  We’re all on the boat!!!”  Yep!  That’s about right and at max capacity, you can feel it.