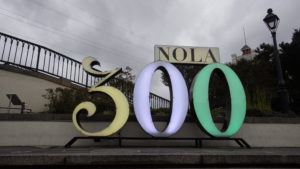 I did say road trip.  Let’s start off with approximate time.  10 hours.  Give or take.  The convenience of this particular trip is that we are mostly on one highway – 55 South.  Other than our necessary stops for food, gas, rest room, stretching legs or change of drivers, it’s pretty much a straight shot down to New Orleans.  New Orleans, LA or NOLA, as people call it, turned out to be just what I wanted.  I wasn’t sure what I was really expecting, but then you don’t leave NOLA without some memory.  As you get closer to the city, there’s a 30 mile bridge, or what seems like it.  You go over or close to Lake Maurepas, the Maurepas swamp and to the edge of Lake Pontchartrain, on and off, over the lakes and marsh lands.  The view was different from that of a traditional bridge.  I kept my eye out for alligators and the road, but it’s really difficult sightseeing and driving at the same time.  I must make mention of gas stations on this particular bridge.  As you would have guessed, there are none.  So, you may consider filling up before continuing on.  We were warned and very aware of the number of miles to destination and the number of miles my car could handle.  We were also aware that we were cutting it close.  Well, we were and were not.  It wasn’t about the bridge or the 30 miles of no gas stations, or the fact we were running low.  It was the traffic.  A sudden upheaval being surrounded by cars on all sides and going slow.  I did not factor in gas consumption in standing to slow moving traffic.

We drove all day.  Started at 9am and by the time we reached we conflicted with an Ed Sheeran concert on the same evening, same time and a couple of blocks from our hotel.  Who would have guessed that we would be 10 mins from our hotel, but it would take us one and a half hours to get past that giant spaceship in NOLA, called the Mercedes Dome.  About the gas in our car, well, we managed to get off the bridge and managed to get gas so we could idle our time away trying to get to the hotel.

I would like to say that I’d heard a lot about NOLA and the French Quarter and it was all wonderful, but the thing that really got me, was the food.  I would have never considered going to a city just to eat, but NOLA is just that.  A foodie’s heaven.  I’m not much into eating.  I’m of the opinion that one eats to live, not the other way around.  So, here I am in NOLA eating crawfish etoufee on our first night there and practically dying from ecstasy.  How can it be possible that food tasted so good?  End with bread pudding and in one night you know your palate is in for a treat. 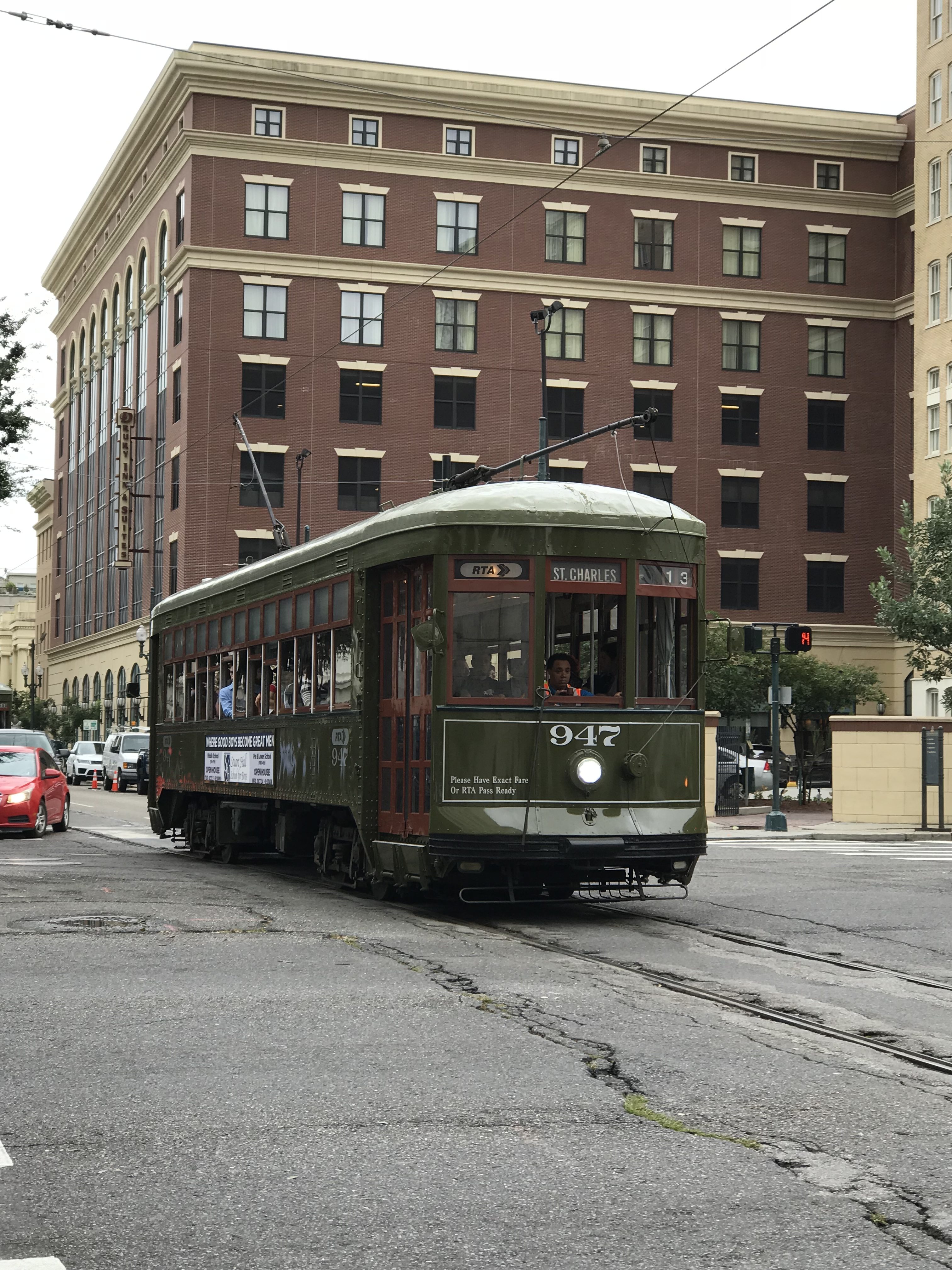 The city is known for its iconic French Quarter.  A square area that is bordered by the Mississippi River on its south east corner and the Louis Armstrong park in the middle of its Northwest side.  St. Louis Cathedral in the picture above is in the French quarter and it stands proudly looking onto the Mississippi from across Jackson Square and Decatur street.  The French Quarter is known for a lot of things.  I’m quite sure Bourbon street is one of those things.  Filled with restaurants, bars, peep shows, tourist shops and a constant wild party atmosphere.  What else is iconic about the French Quarter and NOLA?  Cafe Du Monde.  I am not going to be, but I am in the minority, when I say this

I was not impressed by Cafe Du Monde at all.  Please stop throwing obscenities at me.  To each their own!

So, this place is known for beignets and chicory coffee.  Let’s start off with the coffee.  Apparently, people swear by it.  I’m not much of a coffee drinker, but I’ve had special coffee, you know, the kind that comes with cream and it’s different and good.  This here at Cafe Du Monde was just coffee.  That’s it.  Maybe, this is the place for the coffee aficionado, but I should have ordered the hot chocolate as my wise husband did.  Beignet?  Well, it tasted like a hot cake donut and I’m not into cake donuts.  And that’s all I’m going to say about it.

We did stop by to listen to some jazz played by the street musicians in the French Quarter.  Sounded smooth and wholesome, just like it was meant to be.  Not like some pretentious show.  Just classic NOLA style.

As far as restaurants go, I wish I would have written the names down.  I know we tried to get into Brennan’s for banana fosters.  Apparently, this is where banana fosters originated.  I didn’t realize we needed a reservation.  It was actually a preppy restaurant.  We were walking down the street and even had dinner.  We skipped dessert just so we could hit Brennans and it was a no go.  The people there told me to come back the next morning at 8am.  They said, that was a good time usually to be able to walk in.  I’m unfortunately not an early riser and besides, we had dessert at Mother’s and so we were stuffed.  I should have skipped dessert altogether, but somehow, we kept walking and walking and going into one restaurant after another looking for a banana fosters or bread pudding and sometimes, I guess, when you are looking for something, it becomes elusive.  So, note to self for a future trip.  If you want to go to Brennan’s.  Get a reservation.  And don’t over-eat.  It’s not worth it. 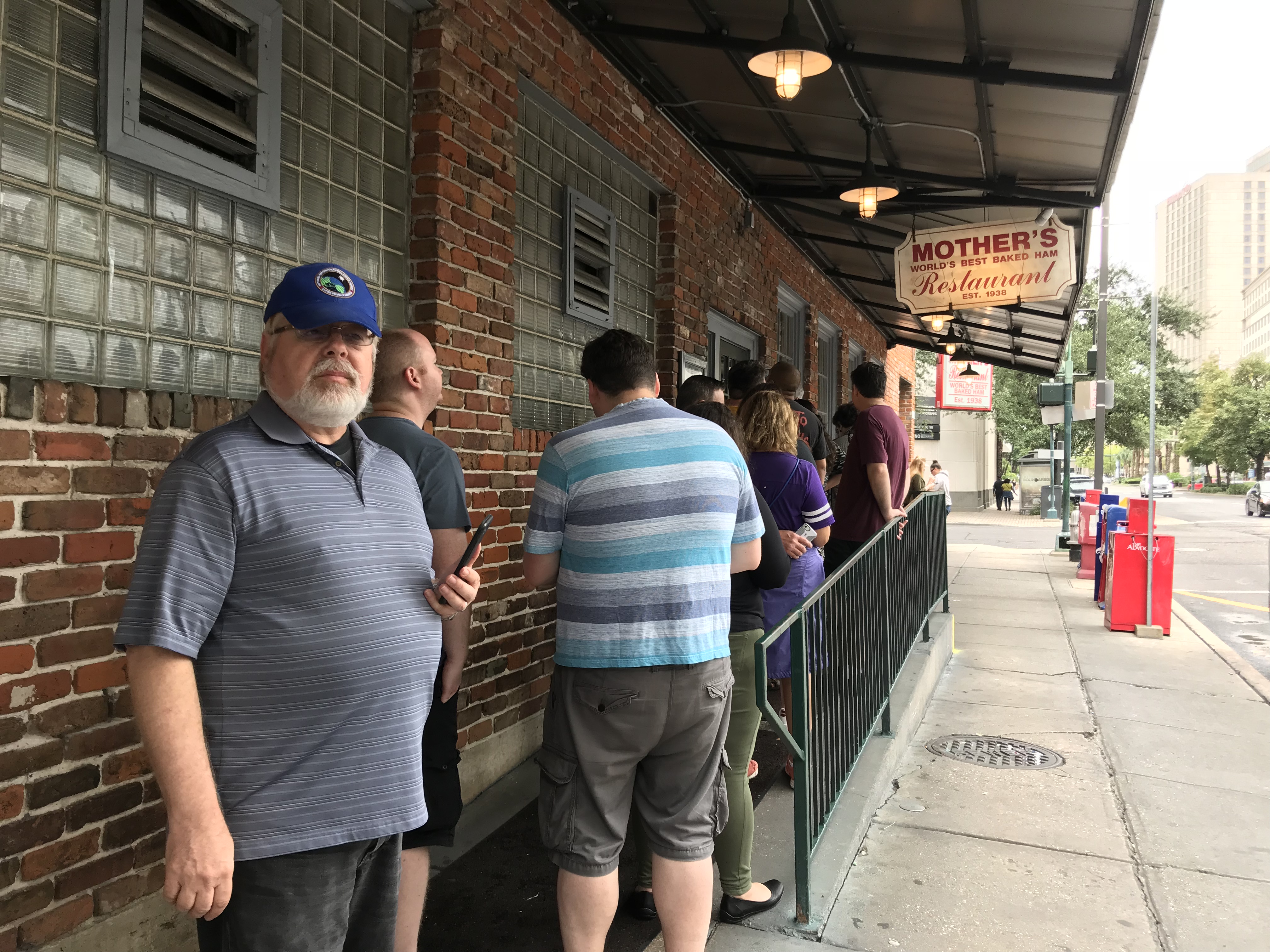 We did Mother’s, twice.  Yes, twice.  The line was long both times and the food was phenomenal both times.  What can I say?  When it’s good, it’s good.  The second time we did Mother’s was for dessert and they give you a large serving of bread pudding.  When I say large, I mean large.  That was enough for me to skip breakfast the next morning altogether.

Breakfast one morning, we decided to walk to Oceana.  Sure, we had a free breakfast at our hotel, but we were in NOLA and Oceana was more than worth it.  The omelette with crawfish etoufee smothered on it and some on the side (as per my request), was beyond my comprehension.  Before I left, I swore to myself that I would learn to make crawfish etoufee.  I wanted to go to the grocery store to buy some of the spices, but then we only had 3 days and before I knew it, it was time to leave.

I will say that on our first day in NOLA we bought a hop on hop off bus tour, for 3 days.  That was great for touring the city and learning things about the city, but also we used it as transportation.  Not the best idea.  Sometimes we ended up waiting for 30 minutes for a bus and they do close off at 4pm so I remember the day we were at the WWII museum, we had to get out because we didn’t want to miss the last bus.  And with that let’s talk about one of the most important place to visit in the city – The World War II museum.  This is another one of those museums that you can spend at least a couple of days, if not more, at.  We spent one day and it was just the tip of the iceberg.  We saw the short film narrated by Tom Hanks.  Who can resist that?

World War II in itself is fascinating.  The strategies and tactics involved on both sides is just interesting.  The way the museum captures those very details and thought processes of the war.  What was Hitler thinking?  How did D Day come about?  Was it a success?  What was planned?  What really happened?  American involvement, or lack thereof.  The Japanese philosophy.  This is all nothing.  The museum can feel overwhelming, but then again, we are talking about the second world war.  It’s something not to be missed.

One day for the hop on hop off tour, one day for the Museum and on our last day, we did the swamp tour and saw the alligators and some native birds.  I think we even saw a raccoon on the swamp.  What is remarkable about the swamp tour?  The tour guide!  He taps his hands in the water to get the attention of the alligator and as it moves towards him, he throws a marshmallow at it.  I would have never guessed that alligators go after marshmallows.  Well, so did the raccoon, but the experience of watching him get their attention and feed them with marshmallows was just a bit weird.  I mean, marshmallows?  The whole area and the swamp lands were very pretty.  I cannot recollect the names of the birds we saw but the tour would be a birder’s delight also.  I would highly recommend it.

And then it was time to leave.  We got in our car, drove to a near by restaurant for lunch before heading back home.  This was our third day and my first time eating an alligator tail.

I think for me, I would like to return to NOLA, to eat.  To experience Brennans and other restaurants that we just didn’t have time for.  Perhaps ride on a street car, or spend more time at the WWII museum and just enjoy a neat city.  I don’t know when I’m slated to return but I will soon, God willing.

I will say this before I end.  There aren’t too many pictures.  I guess, I’m so behind on all my travels that I thought I would not write this post at all.  I thought, that I would not even look at these pictures again and what’s the point with all the pictures, if I didn’t work on them and so, I almost didn’t take any pictures.  Then I took some just so I don’t feel guilty and well that’s my excuse.

I hope you’ve enjoyed this post and I guess I’ll catch you all on my next post.

Before I go, quick question.  Have you been to NOLA?  What are your thoughts about the city? Let me know in the comments.