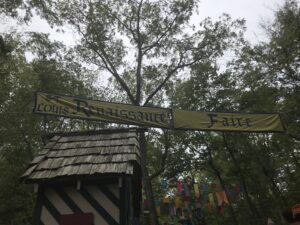 This is my 3rd time at this festival, and it’s just a fun outdoorsy thing to do. I walked around today in my costume that I cannot name or describe. Well, it’s basically, a knee length vest made out of leather. The fun part is that you have to actually tie it up in the front with shoe laces. It’s just very period and costume like, and that’s the fun part. Sure, I have worn it before to just go to the mall to get heads turned but if you want to really do a Renaissance get up, then this place is for you. The clothing is not cheap in the least but where else would you find such eccentric costumes?

And it’s not just the costumes, although the costumes are a huge part of the Ren Faire. You can get unique leather stuff for a price. I purchased a hardbound notebook leather cover for $60. Well, the pattern on the leather was just intricate and again, it’s not something I will run into everyday. Truth be told, I walked into Ren Faire wanting another book cover. I already have one, with a rotatory close mechanism, but when I saw one with a red leather cover, I was not going to pass it up.

I am trying to think about what I really enjoyed about the festival. I think I just loved watching everyone walk around in costumes. They had the King, Queen, their royal entourages and the guards walking around the festival and it’s just good fun. Speaking of King, whenever we purchased anything at the stores, they would say, this is how much the product is and it’s $X for “King’s tax”. Now, that is creative. Who wants to pay regular old taxes. King’s tax, sounds far worse, but hey, it’s way more groovy!

I was thinking about what this festival is known for or rather why should someone come down. My mom being a seamstress would have loved the costumes and would have just made note that she could have made a particular costume so easily. My husband and I, loved the musical shows. It’s lively and creative. So many different instruments. A woman was playing the Hurdy-gurdy. Never heard of or seen that instrument before. I wish I would have taken more pictures rather than video. My video on my iPhone is unfortunately having bit of an issue uploading. Oh and about the Ren Faire in general. It’s just jolly when everyone say ‘Huzzah!’ like that means anything in 2019 but hey, why not?

Why else should someone visit the Ren Faire? I didn’t try my hand at it, but they had axe throwing and also archery. And let’s not forget the main reason everyone goes. The show that’s the highlight of the Faire – The Jousting. I particularly enjoyed it this time. I don’t know why. Perhaps because they made a good competition out of it? It might be because there was a woman who was one of players. Perhaps the story line was a bit easier to follow this time around. I don’t know. I just enjoyed the joust quite a bit.

The food at the Ren Faire was not in the least even close to the medieval food, not that I know what medieval food would be. There were a couple of stalls selling turkey legs and corn on the cob. That seemed to be the most common thing to eat for lunch. The rest, was a hodge-podge of funnel cakes and carnival foods. I wish there were more ice-cream stalls, although, come to think of it, it was a bit cool today.

Speaking of the weather, Ren Faire is usually held September 15 through October 15th. This year, we had quite a weather crisis and Fall almost refused to make an appearance. We had to drag Fall into existence kicking and screaming, like it didn’t want to ever show up. So, today, when I went, weather was partly cloudy and was a bit cool. Perfect. If I would have chosen Saturday, I might have had to deal with the rain. Although, why am I talking about the weather? It’s just something to deal with when you are in the outdoors.

I have mentioned the fun parts of Ren Faire, but what’s the negative? Smoking. Since it’s out in the open, people think they can smoke all the time, everywhere, and I personally find it disgusting. It’s like I would want to go somewhere and then there’s a waft of smoke coming through from the guy or girl a few feet down and I would have to alter my course constantly just so I can maybe breathe. The thing about smoking and the Ren Faire that makes me upset is the number of children that are potentially exposed to second hand smoke, like it’s not a thing at all. I see people smoking so close to babies and I have a problem with it. Maybe they should have a smoke tent or something. If people want to smoke, it’s their prerogative, but if they want to have others breathe it as well, that’s not acceptable.

Yes, I took the time to fill out the survey to mention the 3 negatives of Ren Faire – Smoking, smoking, smoking. Other than that, it was light hearted fun all the way around. If you have never gone to one, take the family and make a day of it. It’ll be worth it.